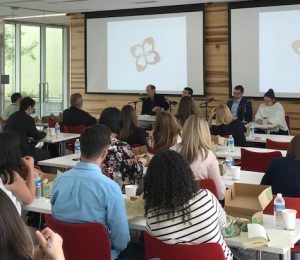 Over 30 leaders from Puerto Rico — from the philanthropic, higher education, entrepreneurial and nonprofit sectors of the island — are visiting New Orleans March 1-2 to meet local leaders and institutions, and learn valuable lessons of their post-Katrina recovery work.

ConPRmetidos, a Puerto Rican non-profit, organized the trip with help from Friends of New Orleans and funding from the Skip Battle Foundation.

It is important for New Orleans to share what it learned post-Katrina – the successes and models that can be replicated, as well as the mistakes and pitfalls – with Puerto Rico, which is experiencing a crippling economic downturn compounded by historic, storm-related devastation. Five months on, 40 percent of the island’s inhabitants remain without stable power, the agricultural sector lost 80 percent of its capacity, and hundreds of thousands of its citizens have felt compelled to move to the mainland.

“Puerto Rico needs a big leap forward. It is crucial we learn from previous disasters’ response and management in order to place innovation at the core of our recovery. We can help our island overcome this disaster, and strengthen its social and economic fiber along the way.”
~ Mariely Rivera – Executive Director, Unidos por Puerto Rico

By standing in solidarity with its fellow U.S. citizens, New Orleans proves to the world that Puerto Rico will not be abandoned on the long and difficult road to recovery and reinvention.

“When I look around at the inspiring talent that is helping lead Puerto Rico’s renewal, at the never-say-can’t attitude of Puerto Rican doers who’ve risen to the occasion for their families and communities, I see that despite best intentions, the magnitude of what we face can be overwhelming. Then I think about New Orleans; how its citizens and friends rescued and reinvented the city from devastation and despair, and in doing so, rewrote its future. New Orleans can help us innovate our own path for Puerto Rico. That’s why we’re here.”
~ Isabel Rullán, Managing Director and Co-Founder, ConPRmetidos

New Orleans and Puerto Rico share a rich history and heritage grounded in the vibrant and mixed influences of native Indian, West African and Spanish cultures. Over the past few decades, New Orleans has been a magnet for Puerto Rican undergraduate and graduate students who’ve found paths towards fulfillment and success via Tulane, Loyola and LSU. While some have stayed and many have moved on following completion of their studies, it is commonly known on the island that those who’ve studied in New Orleans remain deeply connected to it.

“In the wake of Hurricane Maria, Puerto Rico is facing many challenges similar to those New Orleans encountered in the wake of Katrina. This visit affords us a unique opportunity to witness first hand the inspiring story of New Orleans’ rebirth. We thank the Skip Battle Foundation, Friends of New Orleans, and ConPRmetidos for making this possible. All of us are eager to learn from New Orleans’ experience and explore possible collaborations in the hope of building a better future for Puerto Rico.”
~ Giberto J. Marxuach Torrós, President, University of Sagrado Corazón

ConPRmetidos is a nonprofit organization founded in 2012 that believes Puerto Ricans can build a global model of community-driven success. Our mission is to help create a stable, productive, and self-sufficient Puerto Rico.

Installment II Ushering in a new era of biotechnology is no small feat. Both Dr. Trivia Frazier (of Obatala Sciences) and Dr. Sunyoung Kim (of Chosen Diagnostics) have dealt with…

Installment I In parsing through today’s landscape of American biotechnology, the concentrations of development are visibly bicoastal. From Seattle to San Francisco, over to Boston and New York, the industry…