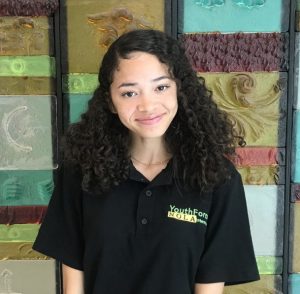 Xiomara Jefferson, an aspiring young scientist, recently sat down to speak with Dr. Lowry Curley, co-founder and CEO of AxoSim.

Dr. Curley co-founded AxoSim in 2014 after winning the annual BioChallenge competition hosted by the New Orleans BioInnovation Center. Since then, AxoSim has been awarded numerous grants and prizes including the Coulter IDEAPitch and a grant from the National Institute of Health.

Xiomara: When did you realize you wanted to be a scientist?

Dr. Curley: I guess it was kind of a long process. In middle school and high school, I was good at math and science, so that lead me to apply for a degree in engineering. What really pushed me away from engineering, and more towards biology, was that I had a little bit of a health scare when I was a sophomore in college, and it made me realize that there’s a lot of treatments out there. There are a lot of people who put a lot of hard work into doing things that really help people. That was where I made the decision that I was going to focus on science and try to make a difference.

Xiomara: What kind of science do you participate in?

Dr. Curley: Neuroscience is, broadly speaking, the science that we’re working in. We do a lot of stuff with cells, biology, testing of those cells, but broadly, its neuroscience.

Xiomara: Who does your research and technology benefit?

Dr. Curley: We’re trying to help people who have diseases like multiple sclerosis, ALS, Alzheimer’s. Ultimately, we hope that what we’re doing will help improve their lives.

Xiomara: What exactly are you guys doing?

Dr. Curley: We’ve developed, essentially, a tool to help pharmaceutical companies do better research and development, and we’re trying to help them develop drugs for multiple sclerosis and ALS. For multiple sclerosis, for instance, there are some drugs that are available that slow down the disease, but none of them stop it or reverse it. So we’ve got this tool that we’re hoping to make next-generation, better versions, of these drugs that will stop or cure the disease.

There’s small wins and there’s big wins. You have to make sure you celebrate the small wins.

Xiomara: Wow, that’s so cool! So what motivates you and keeps you inspired, especially given the lengthy and difficult process of developing these tools?

Dr. Curley: Being able to think about and see the difference that we can ultimately make. We’re now working with some big companies, and we’re actually starting to see how our tool is helping them make better decisions. So yeah it’s a long and lengthy process, but there are little things along the way that you count as successes that help you remember that you’re making progress and doing good things. There’s small wins and there’s big wins. You have to make sure you celebrate the small wins.

Xiomara: What challenges do you face in your field?

Dr. Curley: There’s a lot of them. I would say the biggest one is that we’re dealing with biology and neuroscience and it’s very complicated. We might do an experiment one day and then do it next week and its completely different, so it’s kind of difficult when you’re working with complex tests to make sure you’re doing it the same way over and over again.

Xiomara: Do you think being located in New Orleans has helped you in advancing your research?

Dr. Curley: I think it has because, in part, we’re able to work with some of the universities around here, like Xavier, Tulane, and LSU a little bit, so we can kind of draw on their knowledge. But then also, one of the good things about New Orleans is that people are always very willing to help here versus somewhere like Boston. Boston is very cutthroat, so people aren’t as willing to spend their time on you because they’re out trying to some of their own things; it’s a different culture.

Xiomara: Ok, last question. If you could give me one piece of advice, what would it be?

Dr. Curley: One piece of advice, that’s hard. One of them that might sound obvious but isn’t is never give up. You’re going to have a lot of setbacks throughout your life, throughout your career, throughout your studying, but as long as you keep going, that’s the important part. And realize, everyone else has had setbacks also. You know, it’s easy to look at people who have done great things and assume that they got there easily, but that’s definitely never the case. And I guess the parallel of that, which I already mentioned, is celebrate the small wins. So you might have a five-year goal, but there’s a lot of things you have to accomplish along the way that are not easy but you should stop to remember that it’s a big win.

Xiomara: Alright, thank you so much!

Installment II Ushering in a new era of biotechnology is no small feat. Both Dr. Trivia Frazier (of Obatala Sciences) and Dr. Sunyoung Kim (of Chosen Diagnostics) have dealt with…

Installment I In parsing through today’s landscape of American biotechnology, the concentrations of development are visibly bicoastal. From Seattle to San Francisco, over to Boston and New York, the industry…